They hit the road to discover where to camp, what makes each destination unique, which trails are favored by local legends, who smells after a few weeks in an RV, when to grab a hotel, and how to offset carbon footprints without ending travel plans. Originally from the Lake Tahoe area, the Road Icons Crew had never before skied the legendary Sierra snow that softens below Mammoth’s strong wind buff. They skied bell to bell for three days with the Minarets peaking down from along the jagged skyline and learned how the mountainous landscape was formed by a volcano.

“That wind buff on Dave’s. Wow. I’ve never skied a run that gets better and better as more people ski it.”
– Thor Retzlaff

“California’s Family Mountain” invited a legendary local family of ripping snowboarders to show the Road Icons Crew around. They tore down groomers, played on boxes, and spotted June Lake in the distance before driving back down to explore the town of June Lake.

“We only had one day at June and wish we could go back for more. It’s just beautiful there!”
– The Road Icons Crew

From groomers and groms at Snow Summit, and then over to big air and bloodies at Bear Mountain. The Road Icons Crew spent two days in Southern California, soaking in the sun, shedding their warm layers for some t-shirt weather, and relaxing after a day in the park while chatting up locals on the brand new deck at Laybacks.

“We met the cutest kids at the base of Bear Mountain when we handed out swag, they’re all just ripping little snowboarders too.”
– The Road Icons Crew

From Southern California, the race began. Taylor and Alex stayed with a friend in Carlsbad and then flew on Taos Air direct to Taos. Meanwhile, Johnny and Thor drove through the cold desert night. They all arrived at the same time on Thursday afternoon, reunited and ready to hit the Rockies. They scored two deep powder days, helped the Taos team open up Kachina Peak Lift, made friends with the community, and unwound to live music from local bands at night.

“We seriously fell in love with Taos. The people, the culture, the snow, the terrain, the fresh mini-donuts at the base. Now we want to move here.”
– The Road Icons Crew

Taylor floats through a tree run

For their first foray into Colorado, the Road Icons Crew began with Copper Mountain (known as #RaisedOnColorado) and scored a deep powder day for a friendly welcome into the Centennial State. Shown around by legendary ski instructor and all-around Copper savante, Todd Casey, they got the full terrain tour. The crew hucked cliffs in the terrain off the brand new Three Bears Chair, practiced flips at the Woodward Barn, and then ended each day by wandering in and out of village shops and bars.

“I had no idea what to expect of Copper, but the snow and the terrain are just incredible.”
– Taylor Zehren

Trip Dates: February 1 – 3, 2020
Camping Spot: G Lot (if you’d like to do the same, be sure to check in with Security for a 3-day overnight pass)
Favorite Terrain: The Cirque
Local Legends: Trevor Kennison, professional sit-skier
Top Après Spots: Doc’s Roadhouse

After a few days spent in the Mile High city of Denver, the Road Icons Crew ventured to the city’s renowned locals mountain, Winter Park. They skied from sunrise to sunset, hitting both first tracks skinning and twilight headlamp skiing with a guide from the Winter Park Adventure Concierge. Smiles were ear-to-ear as they experienced the first opening of the season for The Cirque, fresh tracks in Eagle Wind Territory, a quick on-mountain yoga session, and a round of appetizers at Doc’s during the Super Bowl.

“It was so cool to be there when they finally opened the Cirque for the first time of the whole season.”
– The Road Icons Crew

Alex & Johnny look out over Steamboat

In the home of Champagne Powder® during a 3-foot powder storm, the Road Icons Crew swallowed up all that Steamboat had to offer. They chased Olympic alpine skier, Caroline Lalive, through the trees and down chutes. As any day of deeps should end, the crew shook off the cold with a stop at Timber & Torch for hot chocolate by the fire. Warmed and rested, the town of Steamboat Springs beckoned with an invitation to test out their new cowboy boots at F.M. Light & Sons.

“Skiing with an Olympian was awesome. It was so fun trying to keep up, and Caroline is a badass.”
– Johnny Egan

Stoked on the Colorado Legend

The forecast sang of the snow and the Road Icons Crew was listening. Snow chains set in place, the RV got trucking towards fresh tracks in Summit County. Once on the hill, the crew crushed multiple feet of snow while chasing Al Henceroth – A Basin COO and local legend – and his daughter, Whitney Henceroth, around the mountain’s many steeps and deeps.

Whitney, a ripping skier in her own right, literally grew up above the ticket window at the base of “The Basin” and knows the hill intimately. With Whitney riding point, the crew explored the new Steep Gullies & Beavers terrain to much acclaim.

Both stoke and hunger ignited, the team stopped for mid-day charcuterie plates at Il Rifugio, grabbed après at 6th Alley, and then capped off the evening with a Moonlight Dinner at mid-mountain. For the rest of the weekend, the Road Icons Crew joined other pass holders to enjoy live music, drink specials, late lifts, and early ups. Arapahoe Basin truly pulled out all the stops.

“A Basin is quickly making it to the top of my favorites list.”
– Johnny Egan

Johnny flies into a powder day

Thor flips out in The Glades

An impressive 45 inches of soft Colorado snow fell in the week leading up to the Road Icons Crew’s visit to Eldora. With the scene set and the snow stacked, the crew was outfitted in fancy new duds (who doesn’t love a costume party?) and put to right to work upon arrival. Tender moments in plush onesies matched tense competition as crew members competed against one another in the ultimate evening race event: Eldora’s famous Nighthawks Race Series.

The next morning, they celebrated fresh snow by throwing tricks in “The Glades” and “The Pillows”. After a powder fix, they visited Woodward Park #2 of the tour – this time the Woodward Eldora Terrain Park. Appetites earned, the crew submitted to 10,600 feet where the Lookout Lodge serves up pizza and beer with a view of the Rockies.

“The snow was so good in the glades that I was able to finally perfect a new trick I’d been learning.”
– Thor Retzlaff The crew arrived at Deer Valley on a particularly chilly week in Utah. But the frigid temperatures didn’t dampen their spirits – or their time on the mountain. Every morning, Thor would “drive them to warmth” as the RV heated up. By the time they reached the base, their limbs were defrosted and they were stoked to ski again on the incredible terrain.

The Deer Valley team happily welcomed them, and they all became fast friends. Heidi Voelker, former World Cup alpine ski racer, guided them throughout their visit, exhibiting immense passion for and knowledge of the mountain. At the end of the day, they dined on heaping plates of incredible food. The Seafood Buffet was a crew favorite, leaving them feeling fancy and full for the evening.

“The seafood buffet is 100% worth the ritzy splurge after a long day on the mountain, and certainly far more delicious than our less ritzy home-cooked RV meals! ” – Alex Mezger Jumping from the rocks at Brighton The crew enjoyed a casual, laid back visit to Brighton. They loved the local vibes, and had a blast with their friends on the mountain. After testing out some tricks in the terrain park, they skirted over to Solitude via SolBright. Just for a quick taste before their official trip. They topped it all off with a round of beers at Molly Green’s, toasting to a fun-filled adventure. Hiking through the trees Flipping out on this terrain Toast to a great day on the mountain

After several nights camping in the RV, the crew treated themselves to a cozy stay at The Inn at Solitude. A good night’s rest prepared them for a little bit of hiking, and lots of leg-burning runs. The deep powder and advanced terrain of the steeps kept them entertained for hours. In the evening, they spent some time strolling through the village, and hung out with friends in Salt Lake City, just a short 30-minute drive away. Skiing through the trees For a little change of pace, the crew crashed at a friend’s house in Salt Lake City. And rather than drive the RV, they hopped on the free Ski Bus to enjoy the advanced terrain of snowbird. They lucked into some great snow, and had a blast riding the Peruvian Tunnel to explore the Mineral Basin. Their Leap Day visit was made complete with a warm up at the Cliff Spa hot tub, soaking in stellar views of the snow-packed peaks. Picking the next line 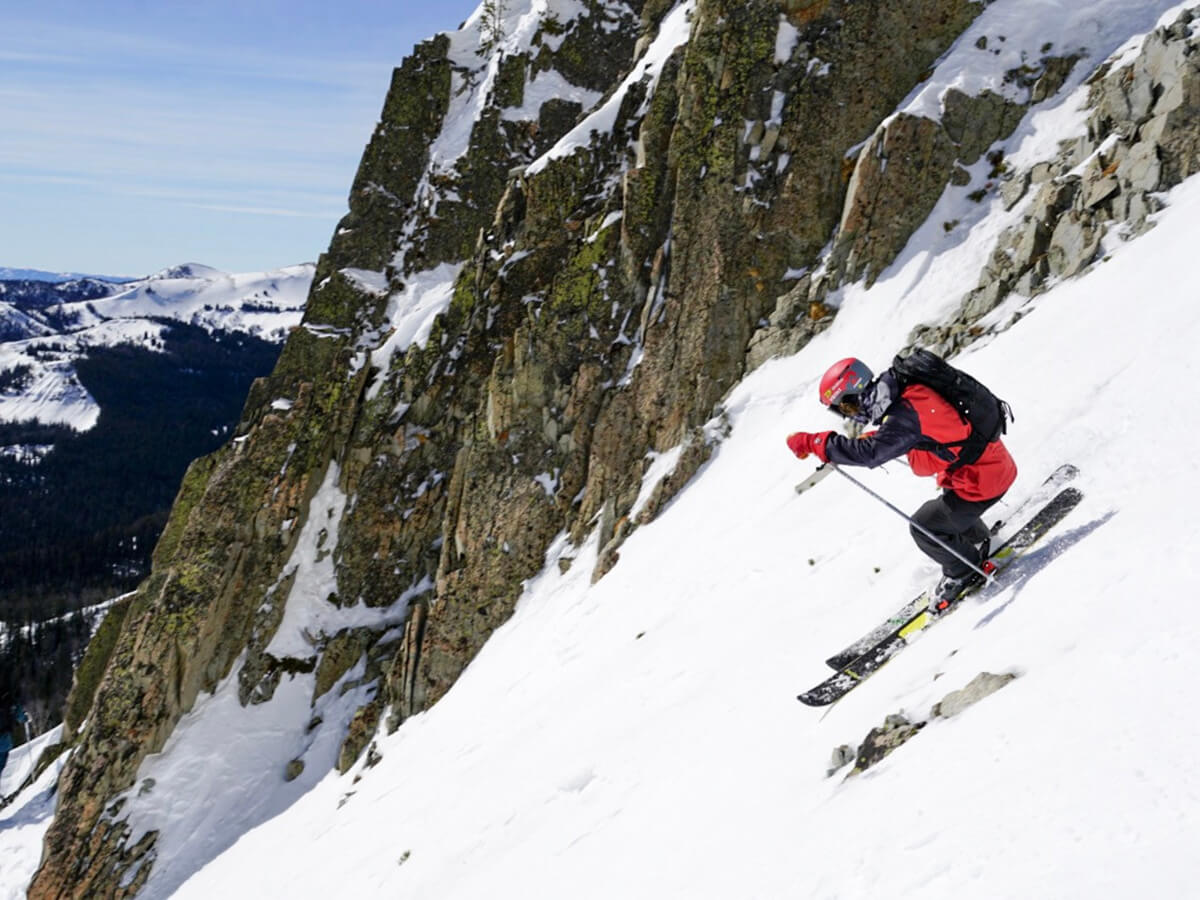 This run is no match for Johnny Putting skills to the test The crew’s next stop was Big Sky in Montana, Johnny’s home mountain. With more than 5,800 acres of skiable terrain, Big Sky gave the crew plenty to explore. It’s a good thing they spent a few days here, getting to know both the terrain and the locals. After days spent traversing the challenging trails, it was nice to warm up and relax in a real condo.

“It was so good to be back at my home mountain and show the Crew around, although Maria & I may have challenged them at moments with that traverse to Headwaters.” – Johnny Egan Check out that view Kickin’ up some powder Hoping for a whip cream mustache The slopes are calling Crossing the border and driving through the Canadian Rockies, the Road Icons were greeted with breathtaking scenery and super nice locals. Like ridiculously nice. They set up camp amidst a gorgeous backdrop and prepared to tackle the three resorts of SkiBig3, located in Banff National Park.

It was easy to access all three resorts during the visit since they sit pretty close together. Each mountain had something unique to offer, and the local legends provided some great terrain insights. And nothing could beat the views from the gondolas, absolutely incredible. The trip was made complete with plates of poutine, sweet maple syrup, and local beer.

“Wow. Is everyone this nice in Canada? We absolutely love all three of the Skibig3 mountains and the athletes that call this place home.” – Taylor Zehren Tearing through the fresh powder Soaking in the sunshine

After leaving the stunning landscapes of Banff, the crew headed west to Canada’s Powder Highway. This route passes by several ski resorts, including Revelstoke, where the Road Icons made camp in the lower parking lot. They enjoyed Revelstoke’s long runs and wide sweeping views, refueling in between with fresh-baked pastries and paninis from La Baguette. Despite a shortened trip due to COVID-19, the Road Icons loved the time they spent at Revelstoke and hope to return soon.

“Unfortunately, due to the imminent threat of borders closing due to COVID-19, we headed out early to get back to our homes in California. This was the most incredible adventure and we can’t wait to get back and explore more next season!” – Everyone